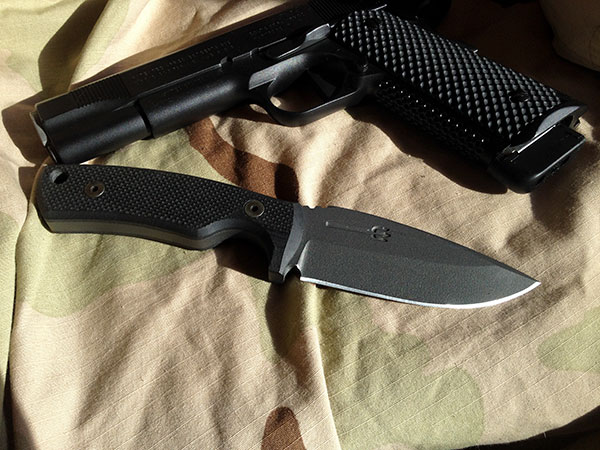 Happy to be back from overseas, I figured I really needed to catch up on some stuff I’ve been playing with. During deployment, my platoon decided to do a unit knife. Platoon knives have been something I have done in the past and have seen other units do that usually seem to go over well if there are no issues with the purchase. A little apprehensive on where to go, I was recommended Jack Stottlemire of Rustick Knives from a friend and decided to give him a call. Besides being a ex-marine (a gentle jab at Jack), Jack was awesome to do business with. Now for anyone looking to do a unit order, sometimes its just easier to make a executive decision. Just a gentle recommendation because getting twenty operators to make a decision on something is next to impossible. So after my best efforts of getting a agreement, and failing, I made a executive decision and placed an order.

Jack retired as a Sergeant Major in Special Operations after twenty six years in the US Army and Marine Corps. He is the man behind the knives and uses all his military experience in designing and producing his blades.

We decided (or I decided) on a smaller fixed blade with a small of the back kydex sheath. Counter to popular belief the vast majority of operators do not carry large bowie style cleavers hung upside down on their shoulder strap like something Arnold would do in the movie Commando. For me personally I find a small folder and a good multi-tool ideal for 99 percent of what I do at work. For those in the know, a small fixed blade comes in handy for jobs one might not think of using a knife for – like sifting through dirt or other substances looking for contraband, popping open locked cabinets, opening up loop holes from a hide site, or any other number of unforeseen tasks one might encounter. I find a 4” blade to be ideal with a fairly thick blade giving me a nice tough tip to use. That was exactly what we ended up with from Rustick. The G10 texture of the handle is perfect for work with gloves, he also offers more extreme handle textures I look forward to trying on future purchases. The knife is hefty and made for work with a subdued cerakote job on the blade to limit rust and shine. The feedback across the board form all my guys has been awesome with everyone in agreement we made the right choice for our order.

I urge any blade fans or someone just looking for a 100 percent US made hard use knife to go check out Rustick Knives. Jack is a one man shop with no website, so you have to look him up on Facebook. It is worth the effort and you don’t need an account to access his page and look at his work.